To guide you through the GUI of IOHanalyzer, please feel free to use either

This command will start the GUI server on your local machine (using the IP address 127.0.0.1 and a random port number). The web browser will be launched and connect to this address immediately after starting the server. The functionalities are grouped as follows:

The GUI interface to load the experiment data is shown in the following figure, in which the user is asked to upload a compressed archive. The following compression format are supported: *.zip, *.bz, *.tar, *.xz, *.gz. Note that, when the user’s data set is enormous to handle, it is possible to speed up the uploading (and hence plotting) procedure by toggling option Efficient mode on, in which a subset is taken from the huge data set. Moreover, when using the online GUI, the user can also load official data sets provided by the author, using the Load Data from Repository box on the right of the page. At the time of writing, two official data sets are made available, each of which contains results of 11 algorithms on all 23 test functions, over dimensions {16, 100, 625}. For the specification of those two data sets and updates on the data set, the user is suggested to visit data page. 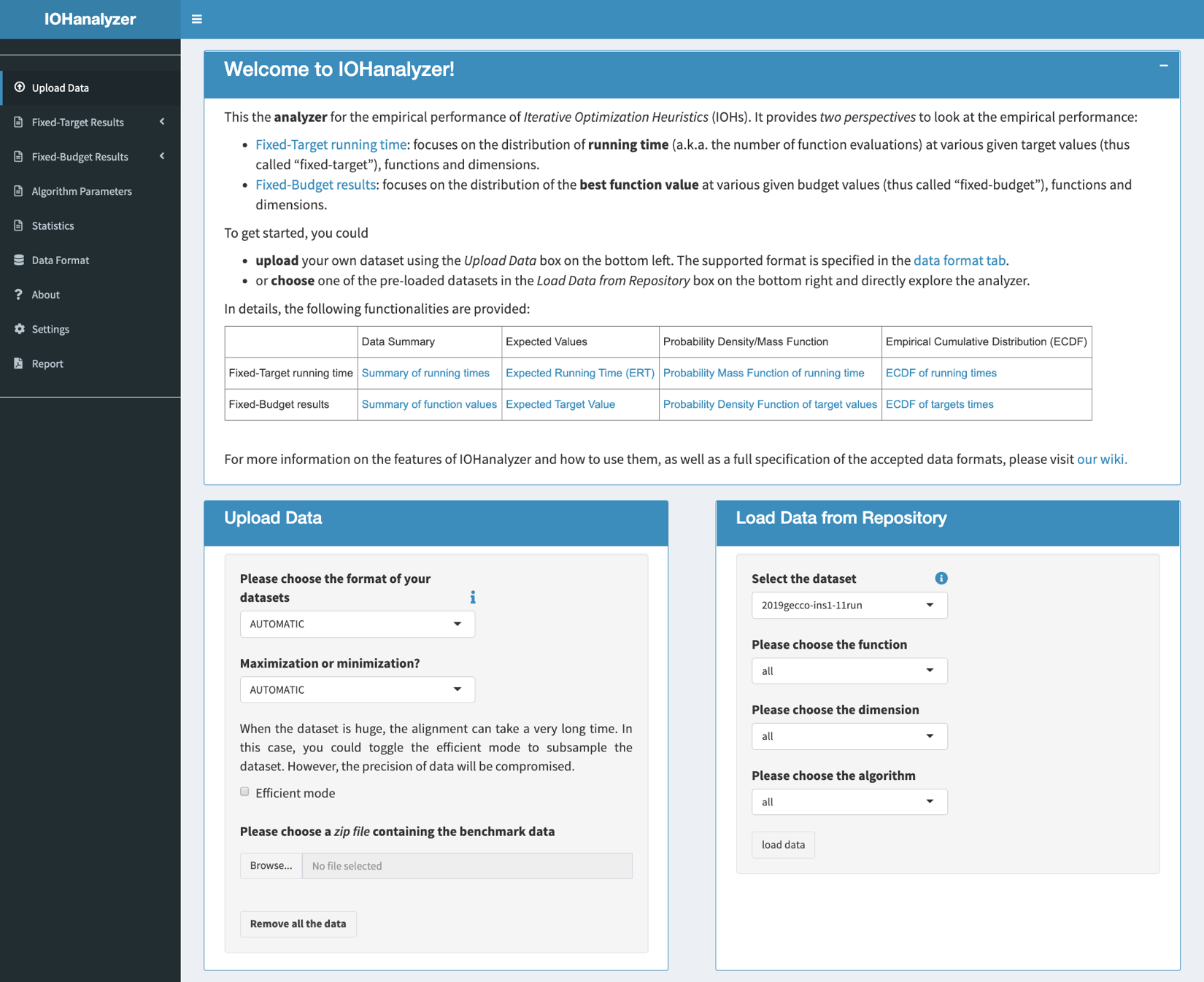 It provides some statistics on the running time $T(A, f, d, v)$, meaning the function evaluation an algorithm $A$ would require to reach target value $v$ of test function $f$ on dimension $d$. In the following, the indexing parameter in $T$ will be dropped if no ambiguity is created. Assuming a number of independent runs of algorithm $A$ is performed on the tuple of $(f, d, v)$, the set of results from all runs $(t_i)_i$ is considered as a simple random sample of $T$. Here, three tables are provided to summarize the sample $(t_i)_i$ of $T$: 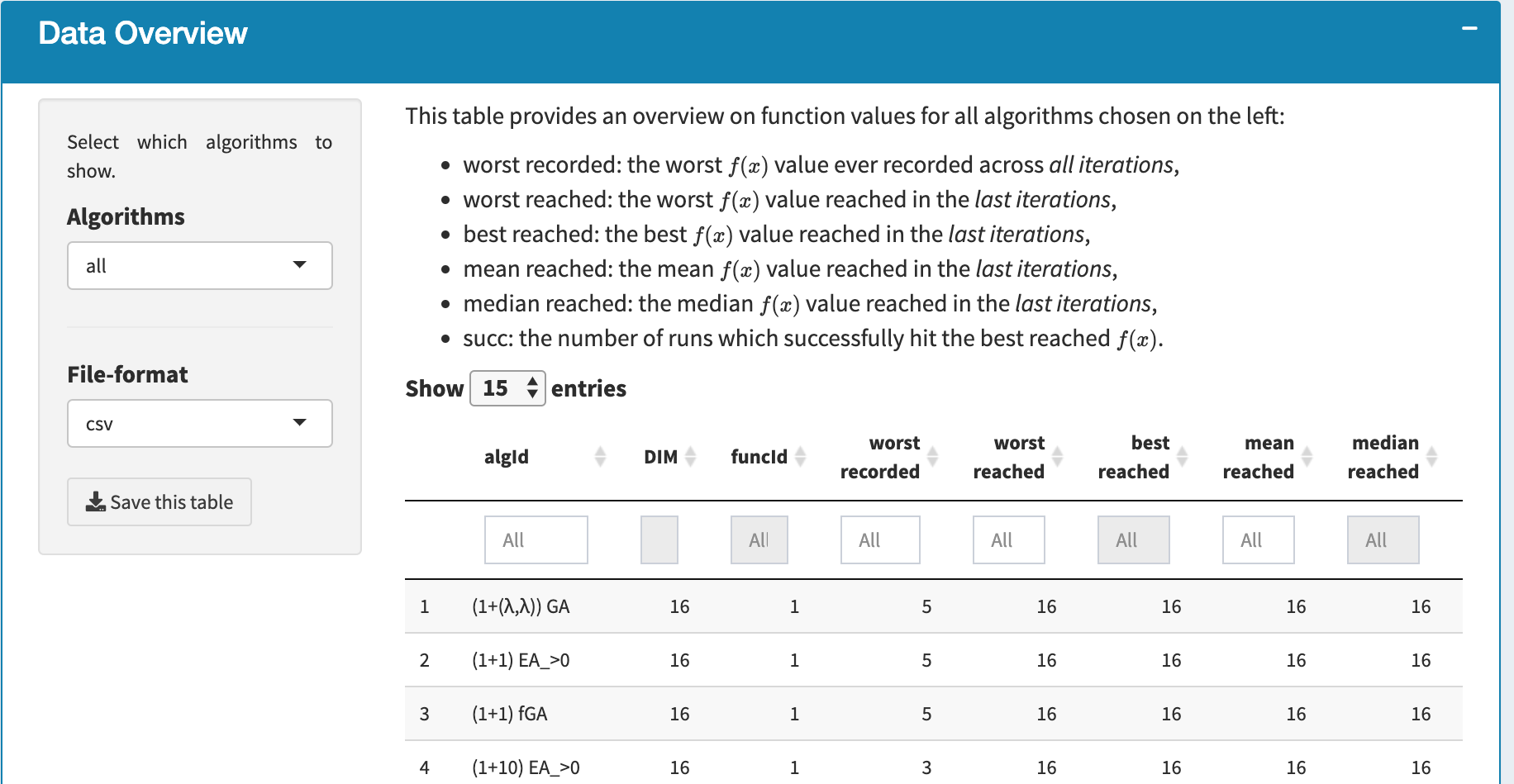 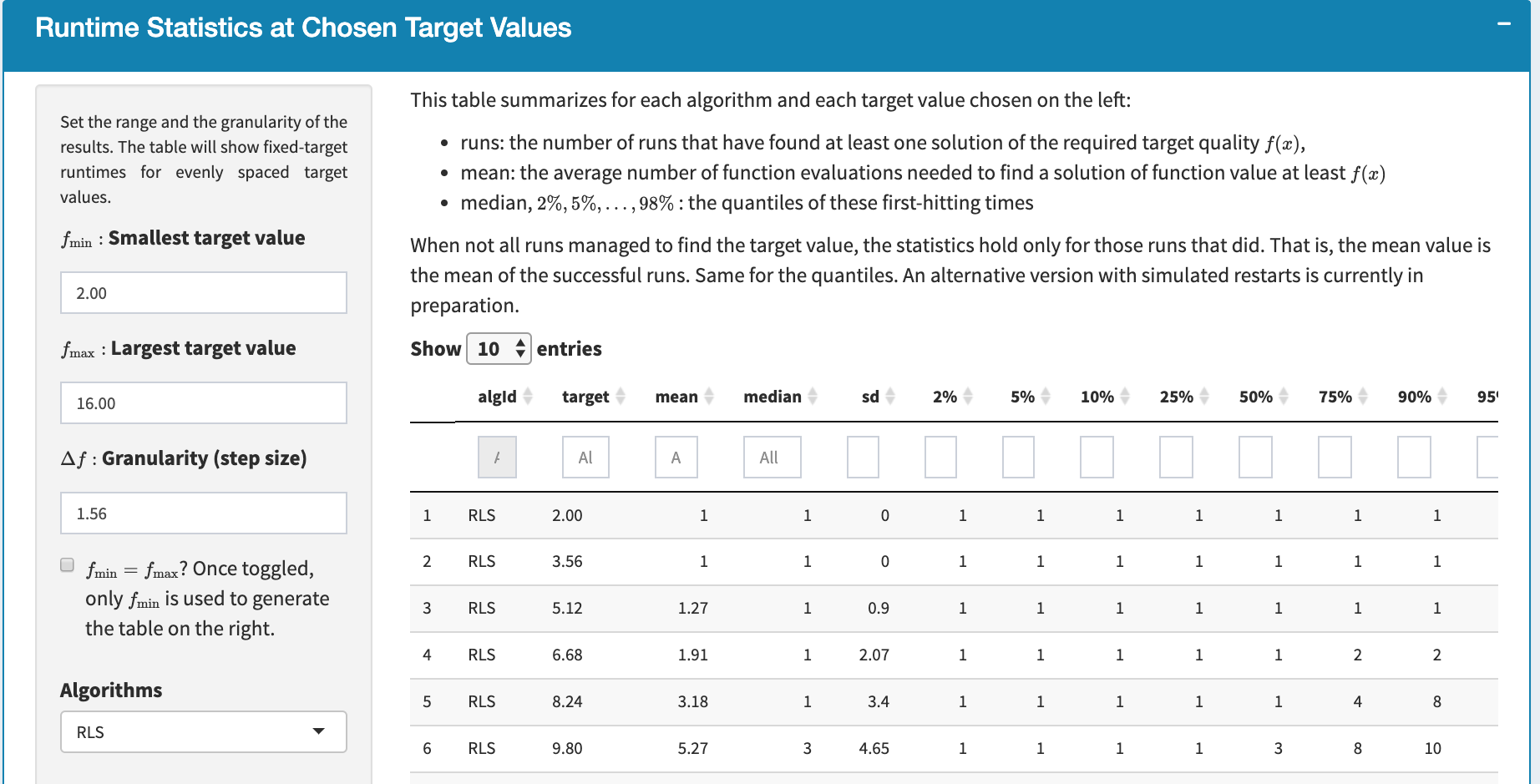 An interactive plot (using shiny package) illustrates the fixed-target running times. An example of this plot is shown as below as below. The interactive plot can be adjusted by a couple of options on the left menu as shown in figure, including showing/hiding mean and/or median values along with standard deviations and scaling axis logarithmically. The user also selects the algorithms to be displayed, the range of target values within which the curves are drawn. The displayed curves can be switched on and off by clicking on the legend on the right of the plot. In addition, the figure can be downloaded in the following format: pdf, eps, svg and png (which also applies to all the plots hereafter). 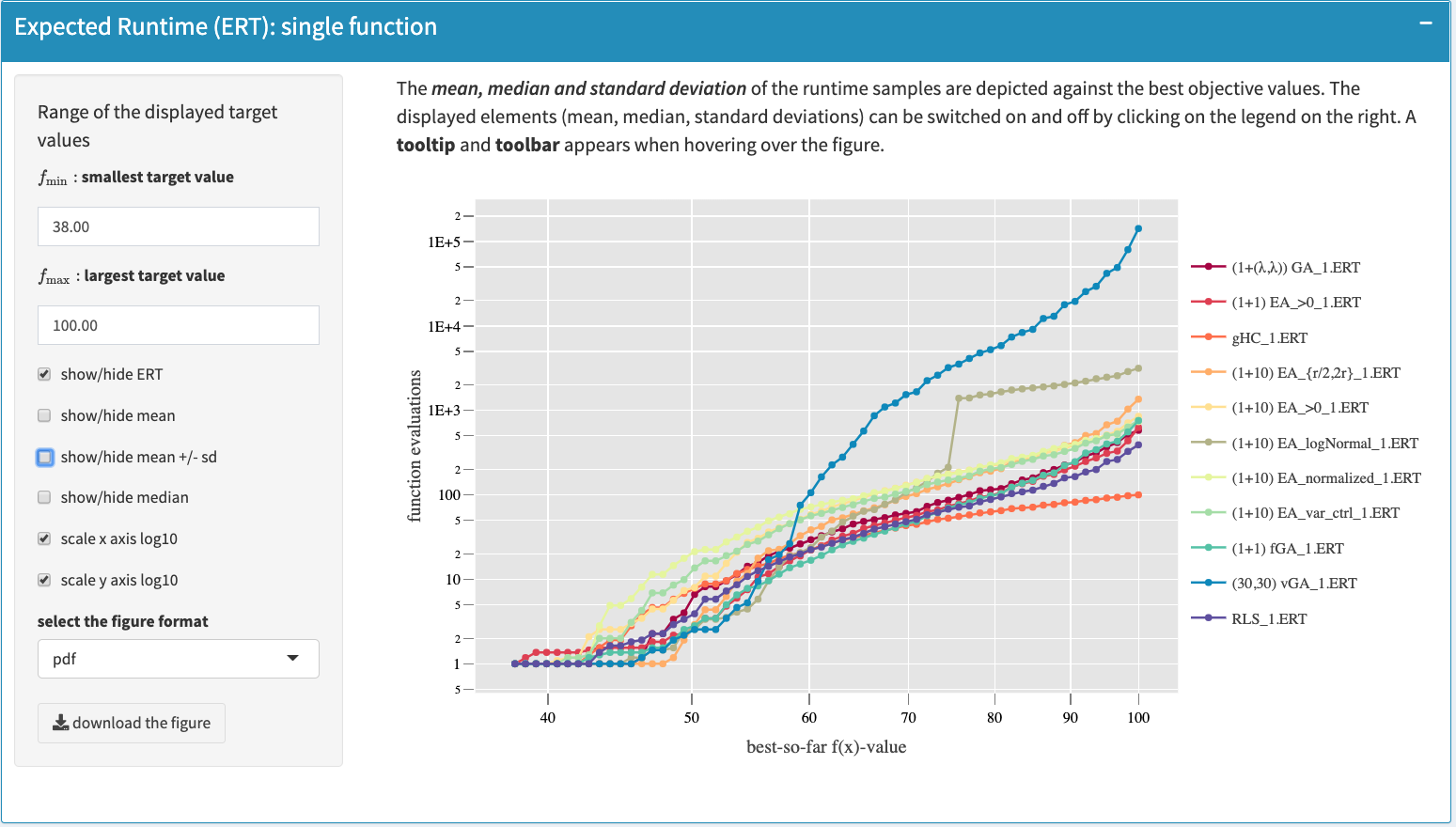 For a selected target value $v$, the histogram of the running time, as displayed below, 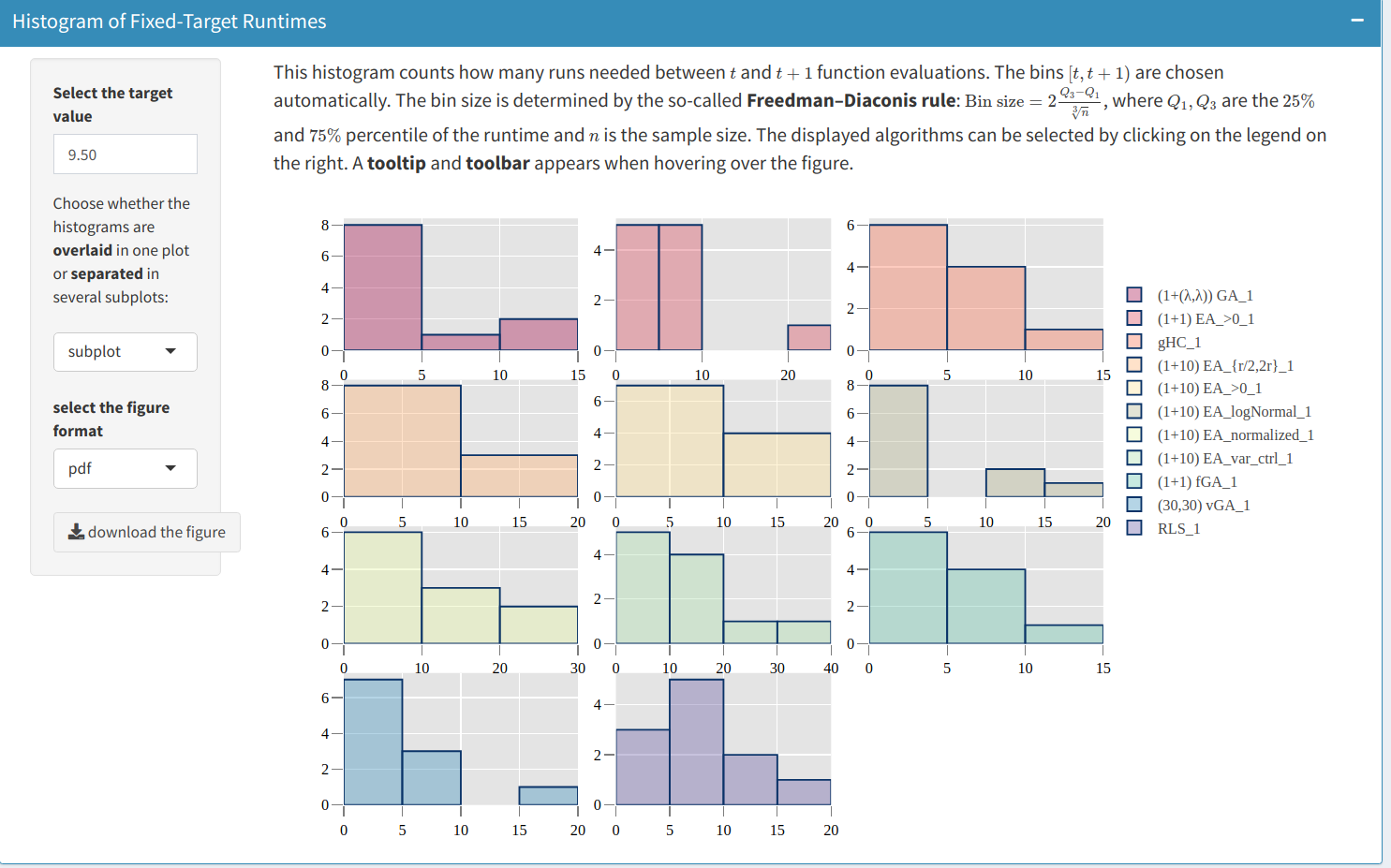 shows the number of runs $i$ where the running time falls into a given interval $[t,t+1)$, namely $t \le t_i(A,f,d,v) < t+1$. The bin size $[t,t+1)$ is automatically determined according to the so-called Freedman-Diaconis rule, which is based on the interquartile range of sample $(t_i)_i$. The user has two options:

In addition to the histogram, the empirical probability mass function (see figure below) might be helpful to get a finer look at the shape of the empirical distribution of $T(A,f,d,v)$. The user can opt to show all sample points $(t_i)_{i}$ for each algorithm (which will be plotted as dots), or only the empirical probability mass function itself. It is important to point out that the probability mass function is estimated in a “continuous” manner, where running time samples are considered as $\mathbb{R}$-valued and then a Kernel Density Estimation (KDE) is taken to obtain the curve. Note also that in the figure many sample points seem overlapping, this might be caused by turning (in the data upload part) the efficient mode on, in which the raw data set is trimmed. 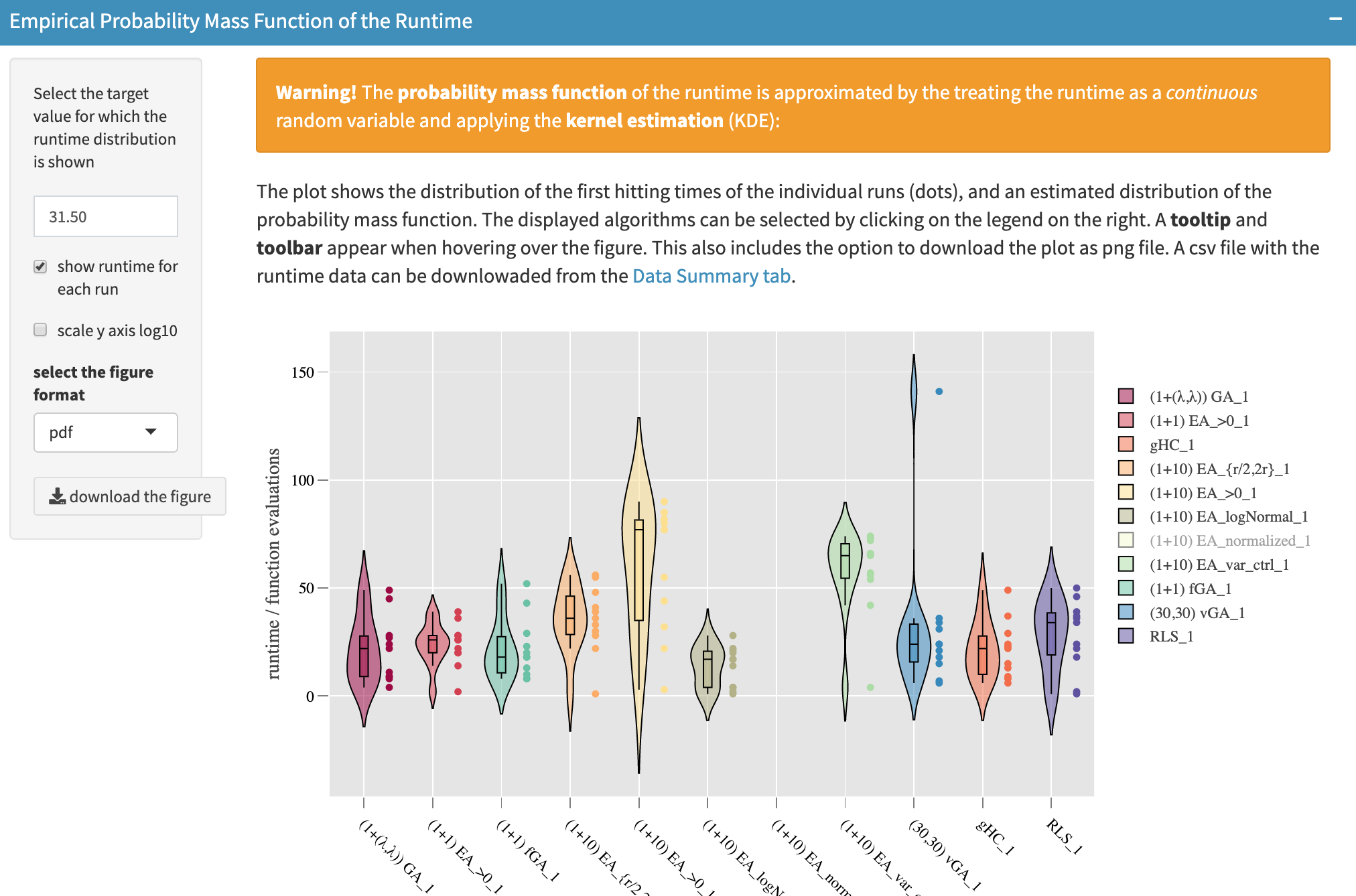 The empirical cumulative distribution function of the running time are computed for target values specified by the user. In addition to showing ECDFs for a single target value, it is recommended to aggregate ECDFs over multiple target, to obtain an overall performance profile for all algorithms. This functionality is exemplified below: 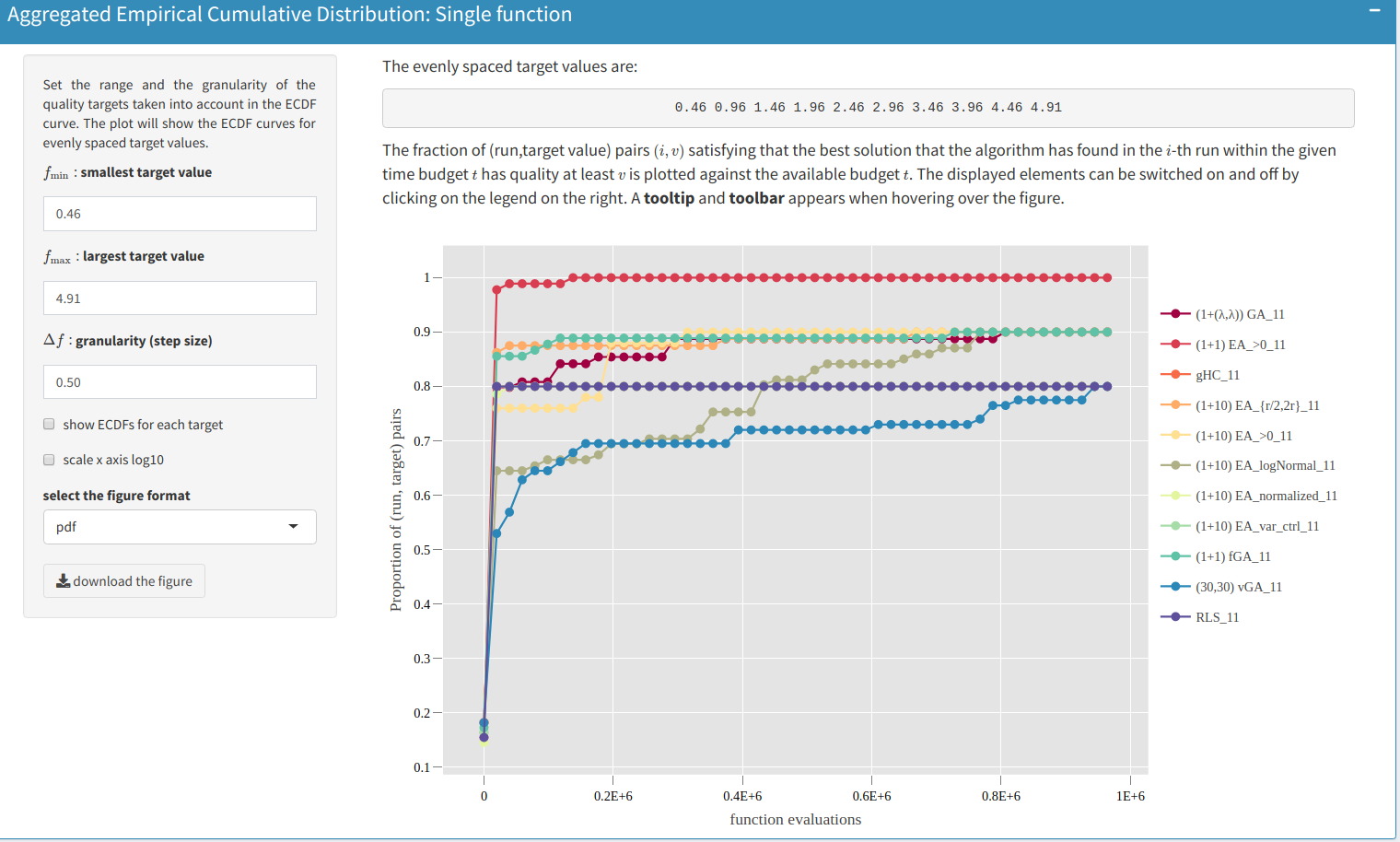 Ideally, the best algorithm would sample the maximal function value $f_{\max}$ in the first function evaluation. This algorithm would have a $100\%$ cumulative probability for any running time. In practice, such an algorithm does not exist, but it serves as a theoretical upper bound. Furthermore, this way of performing the aggregation can be leveraged to a set of test functions, as shown in the following plot: 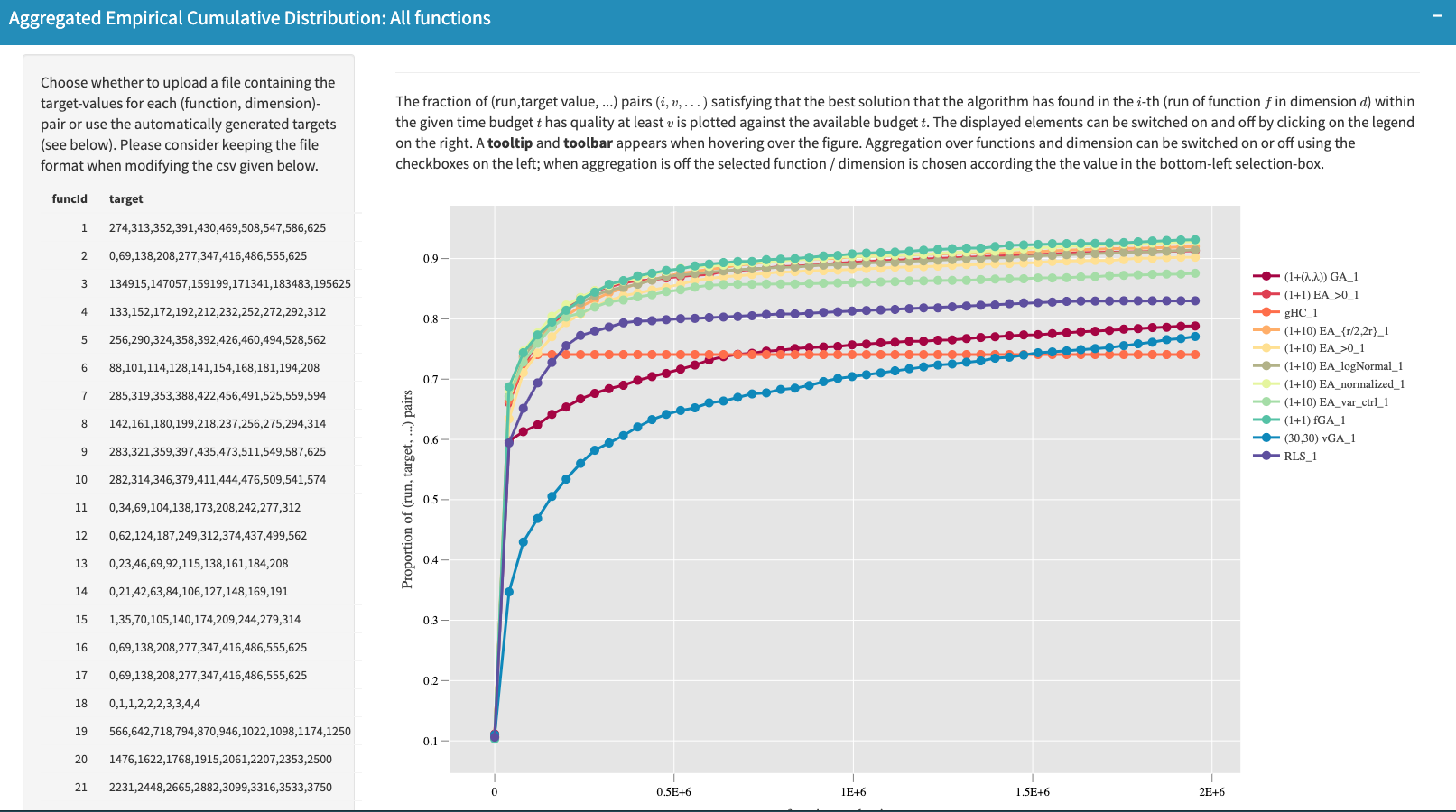 In the example figure, a table of pre-calculated target values are provided for each test function while all 23 test functions are considered here by default. This table could also be customized by

The plot on the right will be re-computed upon uploading a new table of targets. Note that the format of the example table should be retained while editing it to make sure it can be read when uploaded.