We study the optimization of a problem $f\colon \mathcal{S} \rightarrow \mathbb{R}$, i.e., we assume our problem to be a single-objective, real-valued objective function, defined over a search space $\mathcal{S}$. We do not make any assumption on the set $\mathcal{S}$; it can be discrete or continuous, constrained or unconstrained. We do not require that $f$ is explicitly modeled, i.e., $f$ can very well be a black-box optimization problem, for which we are able to evaluate the quality of points $x \in \mathcal{S}$ – e.g., through computer simulations or through physical experiments – but for which we do not have any other information. Intermediate grey-box settings are also possible, e.g., when some information about the variable interaction is known. To ease notation, we nevertheless speak of black-box optimization in such cases, i.e., even when some a priori information about the problem $f$ is available. We emphasize that the query-based optimization algorithms studied in our work can be competitive even when the problem $f$ is explicitly known. 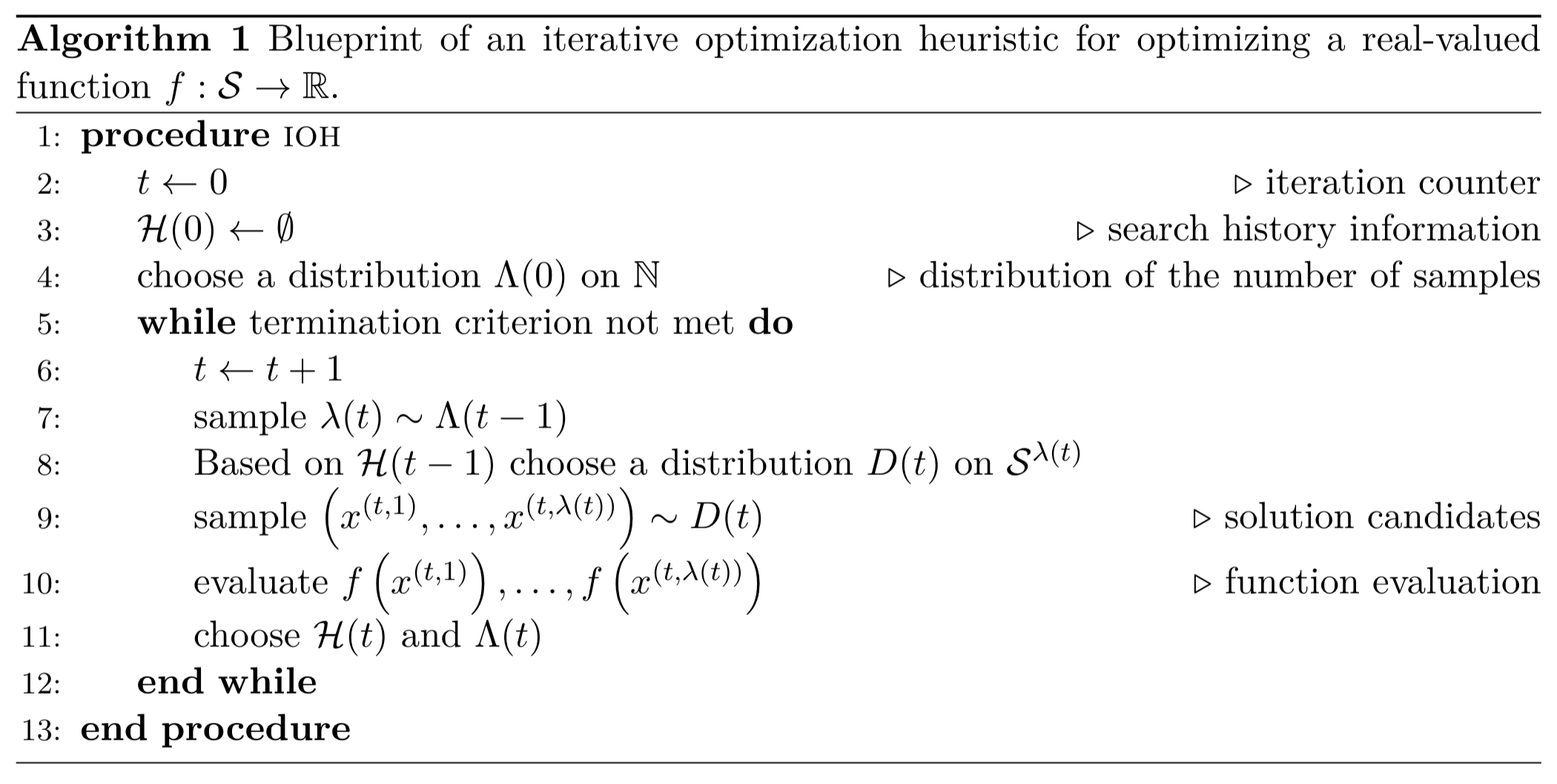 Unlike in classical algorithmics, the most commonly studied performance measures in black-box optimization are based on the number of function evaluations. That is, instead of counting arithmetic operations or CPU time, we count the number of evaluations to determine the running time of an IOH.

As discussed above, many state-of-the-art IOHs are randomized in nature, therefore yielding random performance traces even when the underlying problem $f$ is deterministic. The performance space is therefore spanned by the number of evaluations, by the quality of the assessed solutions, and by the probability that the algorithm has found within a given budget of function evaluations a solution that is at least as good as a given quality threshold. The figure below illustrates this three-dimensional space.

To define the performance measures covered by IOHanalyzer we use the following notation.

Given the aforementioned concepts, the fixed-target analysis focuses on the distribution of running time $T(A, f, d, v)$ at various given target values (thus called “fixed-target”), functions and dimensions, answering the question of how many evaluations are needed to identify a solution of a certain quality. 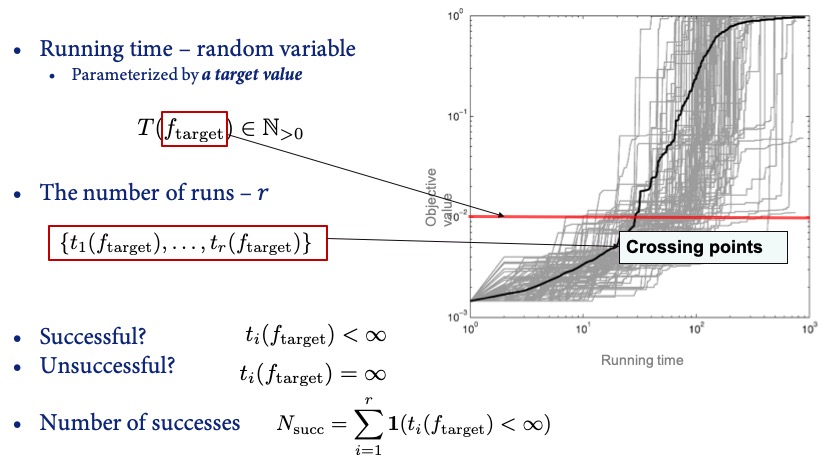 Similarly, the fixed-budget analysis focuses on the distribution of the best function value $V(A, f, d, t)$ at various given budget values (thus called “fixed-budget”), functions and dimensions, addressing the complementary question: what is the quality of the best solutions that can be identified within a given budget of function evaluations? 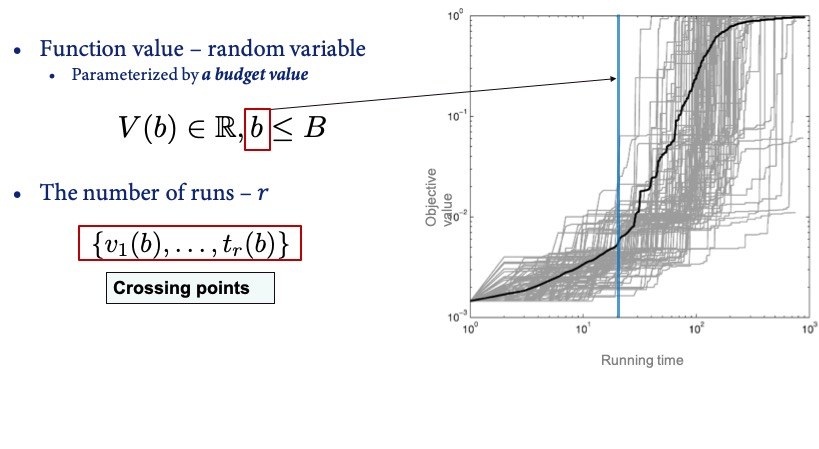 In order to assess the empirical performance of IOHs, some performance indicators should be adopted in IOHprofiler, ranging from simple descriptive statistics to empirical distribution functions of performance measures.

An alternative to the PAR-$c$ score is the expected running time (ERT). ERT assumes independent restarts of the algorithm whenever it did not succeed in finding a solution of quality at least $v$ within the allocated budget $B$. Practically, this corresponds to sampling indices $i \in {1,\ldots, r}$ (i.i.d. uniform sampling with replacement) until hitting an index $i$ with a corresponding value $T(A,f,d,B,v,i) < \infty$. The running time would then have been $m B + T(A,f,d,B,v,i)$, where $m$ is the number of sampled indices of unsuccessful runs. The average running time of such a hypothetically restarted algorithm is then estimated as

Note that ERT can take an infinite value when none of the runs was successful in identifying a solution of quality at least $v$.

For a set of fixed-target running times, its ECDF is defined as

In addition, it is informative to gain the overview on ECDFs over a range of target values, resulting in an overall performance for some algorithm $A$. In IOHanalyzer, two levels of “aggregations” of ECDFs are implemented:

The aggregated ECDFs for function values $V(A,f,d,t,i)$ can be defined in the similar manner.